Last week, Mexico cut off the imports of US pork and beef from 30 US plants owned by Tyson, Smithfield Foods, JBS and Cargill. This is in addition to Mexico joining Canada on December 19th to file a complaint with the WTO regarding COOL. Reportedly, the ban had to do with technical and sanitary issues at the US plants.  As of today Mexico has resumed imports from 21 of the 30 plants and reports indicate that the other nine plants will be back onstream shortly. 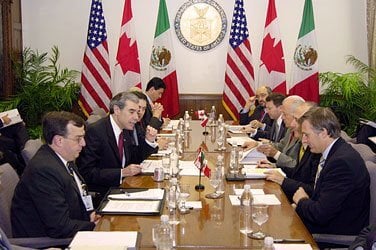 According to a Reuters report, Mexico denied that the import ban had anything to do with COOL or its filing with the WTO. It does seem that the timing is more than just a coincidence. The ban was completely unexpected, it was during the week of Christmas and Mexico is the largest importer of US beef, second in pork and third in chicken.  I find it hard to believe that this was not a shot across the bow to try and show the US that Mexico is willing to play the US game of hardball to get what it wants.  Canada’s next move could be interesting as Canada tends to play safer and follow more diplomatic tactics.  If you didn’t think that 2009 would be interesting, I think you may have to reconsider.