All of us have opinions on where canola prices are going in the future. We are all more experts in what has happened in the past rather than where the future is leading. Sometimes you need to talk to someone that knows what they are talking about and has the facts to back it up. 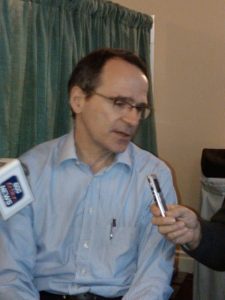 Thomas Mielke, Executive Director of Oil World and is one of the world’s most respected oilseed crop analysts. I was given the fortunate opportunity to participate in an interview with him before his keynote address at the Crop Production Week in Saskatoon. Mielke spoke about the supply and demand issues facing the soybean and canola market in 2009.

Due to the fact that the Ukraine and Australia have finished their exports, Canada has a great opportunity to export 1.7 to 2.0 million tonnes of canola to China this year. Mielke stated, “that China has better crops but import requirements are increasing due to the fact the country wants to increase its stocks strategically.” Mielke is concerned that Canadian farmers expecting much higher prices are not being realistic and should be willing to take advantage of the recent rebound in price relative to the lows.

I think that if you are going to listen to anyone you should listen to Thomas Mielke. I am not saying that he has been 100% of the time but the reality is that he firmly understands the fundamentals and has the data to back up his opinion. Take heed to the advice of taking advantage of the latest bump in price off the low to not be left in the cold should the price fall back again due to demand issues in 2009.