According to a press release from Tyson Foods this morning, President and CEO Dick Bond is leaving the company effective immediately. According to Reuters, Leland Tollett who was the chairman and CEO from 1995 to 1998, will resume the post until a replacement is found. By revenue Tyson is the largest processor of protein in the world. 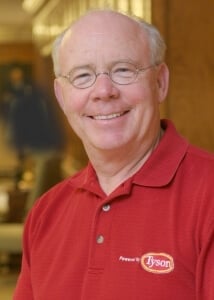 It would seem that there is more to the story than Bond just trying to pursue other interests. Planned corporate transitions do not usually include resignations deemed to be “effective immediately.” The stock has not been very a real favorite of analysts through the commodity surge last spring but as of late had been working its way back to the twelve month highs. On the news of the resignation this morning the stock is down almost 6%. In a Wall Street Journal story posted this morning Tyson restructured its lending agreements a month ago by providing all its assets to gain further flexibility and a one billion dollar revolving loan.  There has been speculation this morning by several news providers that Bond was forced out by lender pressure as a result of the restructuring a month ago.  Of course this is being denied by Tyson at this time.

It is obvious that the ride in coarse grain prices negatively affected Tyson’s earnings which resulted in Bond and the company attacking the merits of the ethanol industry in the US. There has been a lot of conversation on Wall Street as to what Tyson’s strategy would be going forward in order to solidify earnings in this very volatile environment.  Some speculation has circled that Tyson will sell off its red meat division to focus more on pork and chicken.  This seemingly came closer to reality after the proposed sale of Lakeside Packers in Brooks to Nillson Bros became public.  Several industry insiders are also saying that the sale of the red meat division would create working capital and allow Tyson to show institutional investors a restructuring plan is being implemented.  Although it is easy to suggest a sale of the red meat division, the reality is that finding a buyer of such a large holding can be very tricky and may require a multi-package approach based on the limited amount of buyers and lack of profitability in the industry.

When the new CEO is chosen it will come with a new direction and change for the company. I think that it will be interesting as to whether the choice will be internal or external.  Hiring an external CEO would showcase the thrust for change at Tyson while an internal choice could mean more of the same in the short term.

There is no doubt that these are very interesting times at Tyson Foods and will continue you to be in 2009.