Like many industries based on plant science and biology, there is a lot of risk. This is definitely the case with the collapse of the Chilean salmon and winter canola industry. Due to lack of proper environmental practices and controls the salmon farms have been infected with a virus which is killing the salmon population. Consequently this has also significantly affected the winter canola business because its used in salmon feed rations. Compounding this issue is that there is no on farm storage in Chile. There are 40,000 acres of winter canola in Chile which provides a nice rotation for wheat farmers. 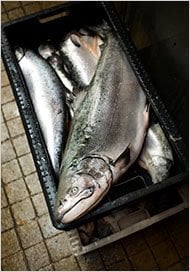 According to a recent story by ipsnews.net, “Salmon is not a native species in Chile, but was introduced for farming in the 1980s. Today it is the second most important Chilean export, after copper…The United States and Japan are the world’s leaders in the harvest of wild salmon, while Norway and Chile are close competitors for the top spot in raising farmed salmon, responsible for 38.7 and 37.9 percent, respectively, of global production.”

The virus is called infectious salmon anemia or ISA, and is threatening the waters of Chile.
In a March 2008 story in the New York Times “All these problems are related to an underlying lack of sanitary controls,” said Dr. Felipe C. Cabello, a professor in the Department of Microbiology and Immunology at New York Medical College in Valhalla that has studied Chile’s fishing industry. “Parasitic infections, viral infections, fungal infections are all disseminated when the fish are stressed and the centers are too close together.”

For Chilean farmers that grow winter canola it has been a tough year because the salmon industry is struggling and many acres of winter canola have been grown without a contract and they have no on farm storage. I met with one Chilean farmer who told me that it is a very tough time for winter canola growers with the commodity crash and the lack of canola buyers.

The salmon industry is working hard to rebuild itself but not without challenges as output is expected to drop 30 percent in 2009. Fish are still dying while the industry tries to increase the environmental and feeding practices of the industry. Some critics say that not enough is being done while others just want the salmon industry to stabilize so that the winter canola business has an end use market for farmers.

Plan for next year — and not last year — when selecting hybrids

The war on weeds is an ongoing battle for growers. With challenges and changes across the industry, including the advent of herbicide resistant weed, growers are looking for tools to add to their arsenal against weeds. Jon Jackson, president at Global Neighbor Inc, says the company's weed seed destroyer offers weed control at harvest on…