From roping and riding to pulling a calf at 40 below, there are many traditions that go along with the ranching lifestyle. Branding livestock is one of those traditions that is still upheld to this day in Alberta. But when did the smell of burning hair become indicative of a tradition? And when did that evolve to the branding I worked this month, where cowboys hold reins between their teeth as they reply to an email on their BlackBerry? 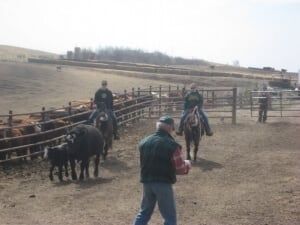 The origin of branding livestock dates from 2700 B.C. where paintings in Egyptian tombs document branding oxen with hieroglyphics. Ancient Greeks and Romans marked livestock and slaves alike with a hot iron. Hernando Cortez introduced livestock branding from Spain to the New World in 1541 when he brought over cattle stamped with his mark of three crosses.

The original Spanish brands were, as a rule, complicated and beautifully rich in design but not always practical. The early American ranchers wanted more simple designs that were easy to remember, easily made, that did not blotch and that were hard to alter. These European customs were imported to the Americas and were further refined by the vaquero tradition in what today is the southwestern United States and northern Mexico.
From the Americas, many cattle branding traditions and techniques spread to Australia, where a distinct set of traditions and techniques developed. Livestock branding has been practiced in Australia since 1866, but it was not until 1897 that each owner had to register his brand. These fire and paint brands could not then be duplicated legally.

Brands have now been registered in Western Canada for more than 125 years. Brands as a form of ownership in community pasture or the selling ring, are a clear way to identify the origin of the animal. Sometimes, the brands become better known than the individuals who use them.

But to those individuals, €œ Branding is more than just a way of identifying cattle, it is a social event, a way to bring together community and a way of making a large task fun,€ says Derek Westman, 4th generation rancher with Westman Farms out of Vermilion, AB.
At the Westman Farms branding, over 50 people ride to bring in the herd which spans many different pastures. The path home consists of as many fields as possible, but the highway is the last step in getting the cattle into the yard. €œFor every mile of road, there€™s two miles of ditch. The odds are against us,€ Derek tells me with a smile as he sends me out on another pasture run. Branding as long as he can remember, Derek plans to take over the W €“ F brand when he takes over the farm. The brand was developed by his dad, Murray, when he took over the farm approximately 30 years ago.
To the Westmans branding is not just about protecting cattle, it€™s about tradition, family and community. As part of a branding circuit in the area, the Westmans ride and brand at many other neighbouring ranches. €œMany hands make light work,€ Derek says as he tells me that there were over 50 riders bringing in cattle the day I rode, and 2 or 3 times that many people the next day for the actual branding and processing of the 550 calves that got done.

While many traditions get lost in the generation gap or the technology takeover, young ranchers like Derek prove that some traditions will carry on no matter what.

Prepping and Selling 4-H Show Calves: Where it Begins

American-based Raven Industries has long been known for its contributions to precision agriculture, from cloud-based data management to guidance and steering applications. The company has also worked on spray application, recently unveiling its Autoboom XRT boom height control with simultaneous ground and canopy detection. "We've been in the boom height control business for 14 to…