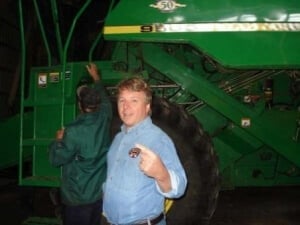 Shaun: Why is the Grain Growers of Canada supporting the idea of biotech wheat?

Phillips: A major reason is the concern that we have over the slow rate of research development in conventional wheat vareties. If you look at the other crop types that have biotech traits, they are developing nutritional, agronomic and yield benefits. If wheat stays conventional the result could be that wheat becomes a rotation filler in between cash crops for most wheat farmers.

Shaun: What are the possible resulting benefits of biotech wheat?
Phillips: We need to send a strong message to public breeding institutions, Syngenta, and small biotech firms to bring new innovations forward to the market. These innovations could include nitrogen efficiency, heat tolerance, fusarium resistance, or cold tolerance. Non-agronomic benefits are in improvements to the milling process and further benefits to the consumer. Consumer benefits include things like health traits.