The following article was published on Farms.com and Truthabouttrade.org. It was written by Dean Kleckner, an Iowa farmer, who chairs Truth About Trade & Technology 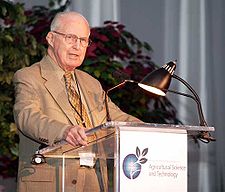 Borlaug once told me that he would trade away all of his life’s accomplishments just for the chance to play second base for the Chicago Cubs.Thank goodness he couldn’t hit home runs or field ground balls as well as Ryne Sandberg! Billions of people are better off for it.
Borlaug, who died Saturday at the age of 95, was one of the great men of our time. Perhaps you’ve read a few of the obituaries. He was called “the father of the Green Revolution.” He won the Nobel Peace Prize. His pioneering work on high-yield crop varieties changed the way the world feeds itself.
There were a lot of differences between me and Norm, starting with baseball: I’m a fan of the St. Louis Cardinals, the arch-rivals of the Cubs. Yet I’ve always felt a slight kinship with him because both of us grew up on farms in northeast Iowa, about 30 miles away from each other.
One day, he returned home, as he often did. This time, however, he was a celebrity because he had accepted his Nobel Prize just ten days earlier. At a church in Cresco, he talked about what he had learned: “In Iowa, we live in a privileged world,” he said. “We take the prayer, “give us our daily bread’ as automatic and always so. But it isn’t for half of the people of the world, who go hungry several times a week.”

Norman Borlaug Discusses Biotech Benefits
by biotechconversations
I wish I could say that I was in attendance at that particular gathering in 1970. (My knowledge of this event comes from an account in the Des Moines Register.) I didn’t have the benefit of meeting Norm until a number of years later. Since then, I’ve listened to him speak many times. His energy and intelligence always struck me. He was active into his nineties, supporting advances such as genetically modified plants.
Norm’s most impressive quality was his profound humility. He felt embarrassed to be called “the father of the Green Revolution” because he knew that so many people had contributed to its success.

Yet he truly deserved the honor. “Through his work in the laboratory and in the wheat fields,” said the chairman of the Nobel committee, Borlaug “has helped to create a new food situation in the world and … has turned pessimism into optimism in the dramatic race between population explosion and our production of food.”

Consider just one example of Norm’s impact: In the 1960s, Indian farmers were able to adopt the tools of the Green Revolution and increase their wheat production in just four years by an order greater than had been achieved in the previous four millennia.
I once experienced a role reversal with Norm. I was giving a talk and he was in the audience. I knew he was out there. It made me a little uncomfortable. This was no time to mess up.
I made one of my standard points: Without advances in technology, farmers wouldn’t be able to feed all of the people in the world. Afterward, Norm approached me and said that I was wrong.
Uh oh. Who was I to disagree with him? The surest way to lose an argument is to start one with Norman Borlaug.
Norm, however, reinforced my point by making it in a more powerful way. “We’ll always feed the people who are here,” he said. “The question is, which ones won’t be here?”
Thanks to the ingenuity of Norm and many others, a billion extra people are probably alive today. Maybe two billion.

None of this was inevitable. About forty years ago, lots of people, including distinguished scientists, worried about the “population bomb.€ They believed that a growing global population would outpace the availability of natural resources, leading to widespread famine and death.
This may be Norm’s greatest legacy: Before catastrophe struck, he defused the “population bomb”.

A lot of American kids dream of playing in the big leagues. Only a lucky few earn the opportunity. Even fewer, however, accomplish as much as this Iowa farm boy.
The Cubs will always have a second baseman. We’ll never have another Norman Borlaug.