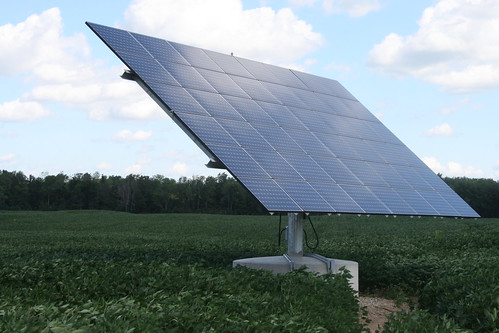 On so many levels solar energy seems to make sense.  You would think that this would really be the case on farms as well.  In Ontario farmers sell solar power back to the grid while in Western Canada most farmers use the solar panel power to fuel the electricity in shops or for pivots or pasture water pumps.  In Ontario this summer there was some significant controversy over the provincial government pulling back incentives to farmers that invested in solar infrastructure.  At Canada’s Outdoor Farm Show there was a whole section of the show devoted to solar power.  At first glance one would think that Ontario farmers are much more conscious of the environment than their Western Canadian farming colleagues.

After further review it is the Ontario government that is trying to create “green” jobs by identifying farmers to invest in the solar technology from Ontario manufacturers.  Similar to the US bio fuel story it would seem that green energy still needs incentives to subsidize the cost of the equipment and price discrepancies for the end product.

Below is an interview from the Outdoor Farm Show with Saturn Power, who describes the solar panel manufacturers point of view on the Ontario Solar power plan.

Why Farmers Should Use Inoculants On Soybeans – Ralph deVries, Becker Underwood

Talking to Farmers: What Will Your Soybeans Yield in 2011?