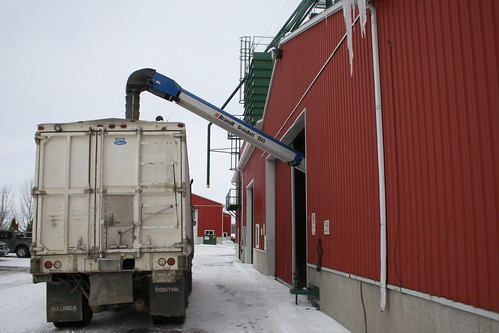 Its one of those moments in time where you say, “where were you when Princess Diana passed away?” Recently we had another where you moment when the Federal Conservatives were re-elected with a majority government.  I can definitely tell you where I was……

It was May 2 and I was in my truck in the middle of the Blood Reserve in Alberta setting up 7 seeders on our first day of seeding. It is the one day of the year that I dread the most because of the fact that I start seeding with 10 of my crew never running anything bigger than a lawn mower. But this time, my first day of seeding ended a little differently than any previous ones. In the midst of everything that was going on in the field, I actually forgot that the rest of the country was in the midst of the federal election. At around 8:30PM I turned on a Calgary radio station to find out that the Conservative Party was declared the winner with a majority. The fact that we once again had a fully functional government was enough to make me breath a sigh of relief.   But the prospect that we finally had a government that was going to take steps in removing the single desk mandate of the CWB…… well it almost brought tears to my eyes.

I’m not going to sit here and go thru the specifics of why the CWB was created. It is laid out quite well on their website.  There was probably very good reasoning at the time for the formation of such a marketing board. Times were tough and something had to be done to make sure that Canadian agriculture, which was still in its infancy, remained sustainable. It was the marketing backbone of newly formed Western economy. Fortunately times have changed and Western agriculture has matured. We now have very stable grain companies in this country that are completely bonded and regulated by different forms of government. The industry has done a very good job of marketing non-board grains such as pulses, feed barley and canola.  Agriculture has boomed to be become big business and global in scope as trade has become the strength of Canadian agriculture. So why is the CWB the only means for Westen Canadian Farmers to market their wheat and malt barley in such a dynamic global market?

There are a few things that irritate me about being forced to sell my grain to the CWB. The first and maybe most obvious is the simple fact that I have NO CHOICE. Sure, they may have set up different types of options thru the board like the Fixed Price Contract (FPC) so you don’t have to put your grain in the pool, but it seems that once the CWB sees that these options are netting more money to the producer than the PRO, somehow an artificial basis falls out of sky which ensures the PRO and the other options net the farmer the same return.  In my opinion this is a matter of personal property rights. My wheat is something that I have produced and so I should be able to sell it.  . It is my right as a Canadian citizen to sell my grain to whoever wants to pay me the most. This just seems to be socialism at it’s finest. In a free democratic country how can any reasonable person say this is fair for the farmer?

My second concern with the single desk is the pricing gap between Western Canada and other areas like Ontario and the United States. I looked today at where the 2010-2011 PRO for #1 Spring wheat 14.5% protein is. It worked out to roughly $8.98 per bushel depending on your freight cost. I then looked at what the price for 14% Protien Springwheat was delivered June FOB Shelby, Montana. That price was $11.39.   Are we ever farming at a disadvantage.  Why are we not seeing these higher returns in Western Canada?  The same price gap exists for barley. How can we have July corn futures at some version of $7.54 but we are selling feed barley delivered Lethbridge at the awesome price of $4.46. I will tell you how. The CWB has done such a good job at exporting barley and feed wheat this year that we have been forced to dump it into the local market at low prices compared to the world market. We might have the cheapest feed in the whole world right here in Southern Alberta.

My third concern is the current voting structure of the CWB elections and the CWB’s position that farmers want their dingle desk mandate. There are too many permit books out there in the hands of people that don’t have a real vested interest in the future of agriculture on the prairies. The CWB election process should have been more based on real producers and acres they REALLY FARM. The simple fact that the prairie provinces almost elected completely Tory Blue during the last election tells me that change is wanted and in my opinion, needed. Stephen Harper and the Conservative have been very clear that they want to give farmers a choice in grain marketing.  They have now been given the mandate. In the meantime, if the CWB feels that their following is so strong, why are they so scared of a dual marketing system. If so many people want to use the old system, the CWB should have no problem burying private company participation in grain marketing. From all the rhetoric that I have heard over the last 10 years that I have from the CWB about the value they create, they should have absolutely nothing to worry about in a dual marketing system.

All that I want as a farmer is to be on the same playing field as my peers in Eastern Canada and the USA. I want to have the same opportunity to sell my grain to whoever I want, whenever I want to better manage my farm. Give me true transparency of where the value of my grain is coming from. Until this past month, there has been little hope in that ever happening. With the Conservative government finally in a majority, we have been given the hope that change is coming in the 2012-2013 crop year. While this isn’t as soon as what I had hoped for the fact that one day soon we will be able to market our grain the same as rest of the free world excites me.

Before I finish, I want to tell you a story about Joe. Joe has decided that he wants to manufacture widgets. There is a strong market for the widgets that Joe makes. So Joe goes out and buys all the supplies he needs to make a years worth of widgets. After a full year of building widgets and paying for all his supplies, Joe is ready to sell them. He is very proud of what he has made and is ready to reap the benefits from a year of work. Problem is he has to sell to the Widget marketing board (WMB) just like everyone else. So he complies and sells for a price that he knows is less than what his fellow Eastern Canadian or American Widget maker is selling for. Joe also has to tell the WMB how many Widgets he has to sell because the amount he delivers must be very close to what he estimated. Did you know that if some of them are faulty, or maybe some of them fall off the truck, the WMB can send Joe a bill for not delivering what he originally predicted. And this has to be done in November. But wait it gets better, as he only gets about 1/3 the amount of what his widget are worth when he delivers them. The WMB has too make sure that they don’t pay him too much in case they don’t do a good job in selling the Widgets to the world. Hopefully during the year, the Widget Marketing Board can do a good enough job at selling that they can ask the Government to make top up payments to keep the widget maker on his feet. You have to remember he has to pay his bank and suppliers for last years materials as well as begin buying new supplies for next years widgets. Finally after 18 months, a final payment will come for the Widgets he bagan building almost 2 years ago.

The ridiculous thing about this story is that, we as farmers have been saddled with an archaic system just like this for far too long. No business person would open up shop with restrictions like this. So while I can understand that there are those that still want to sell their grains through a price pool, I patiently wait for the time when the rest of us can have a real choice and can market our grain through a dual system.

Kevin was born and raised on the family farm outside of Lethbridge, Alberta. Along with his dad Herb and brother Mark, they own and operate Serfas Farms Ltd. Together they manage 38,000 acres of wheat, barley, canola and a 5500 head feedyard. Kevin is married to Jennifer and 5 children, Camerynn, Kourtney, Rhett , Ryan and Tate. When not busy with family and farming, kevin spends time coaching hockey and is a board member for. Picture Butte Minor Hockey.