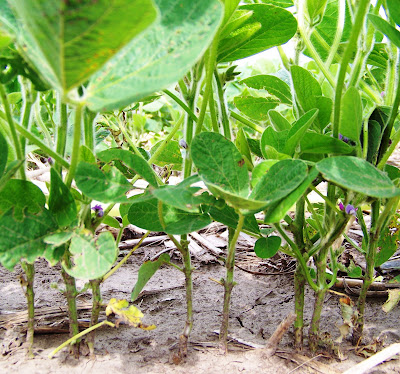 As we get closer to June, with acres still to be planted and wet weather still on the horizon, farmers begin to think about switching from corn to soybeans.  Some Ontario farmers are even considering lowering the CHU’s of the soybeans they will plant.  The one thing that makes soybeans different than corn is that photoperiod sensitive which means that soybeans start to flower in direct response to temperature and daylight hours. This means that soybeans planted weeks apart still flower at the same time and mature much closer in the fall than the wide difference in planting dates would lead you to believe. The earlier planted beans will have more nodes on them, but plant size is not critical for flowering. At this time of year, compensating for that lack of nodes should be done by increasing seeding rates, rather than switching varieties. With most other crops, the later you plant, the later you will harvest, but with soybeans the harvest gap is not as wide.

Horst Bohner is the Provincial Soybean Specialist with OMAFRA. I talked to him about what farmers should take into consideration before they switch to a shorter maturing variety, and when they should make that decision.