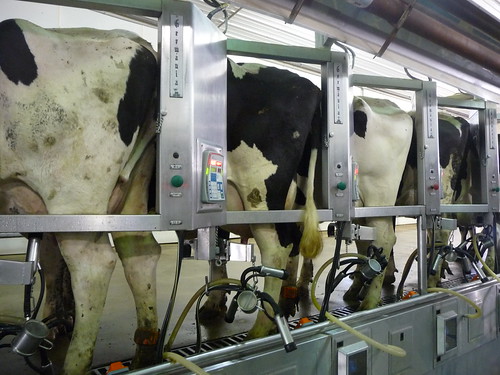 I was driving home tonight thinking about some of the most interesting people that we have interviewed since the RealAgriculture.com started in the fall of 2008. One of the first people that popped into my head was Ian Cummings. Ian is a dairy farmer that moved his dairy farm to the US to avoid the restrictive quota system in Canada. How bizarre is that when you think about your perception of Canadian dairymen having a license to print money. Due to the steady cash flow of the quota system, many Canadian farmers are very jealous of the quota system and the economic stability that it provides. Owning a dairy is an everyday commitment that is like no other in agriculture. I really do respect anyone that will get up at 4 AM everyday, 365 days a year to get the job done. But Iam left all this behind and moved to a less economically stable industry in the US…..

What also made me think of Ian is the irony of his decision and how it relates to the Canadian Wheat Board losing it’s single desk. Ian wanted the opportunity to expand, sell his own milk and compete in an environment that rewards efficiency and productivity. Ian believes in an open market. Ian states in the interview that the quota system in Quebec is like religion and even though dairy product consumption in Canada is much lower than in the US there doesn’t seem to be the political appetite for change. It would be interesting to see if the Conservative’s will try and tackle milk quota after they finish reforming the Canadian Wheat Board’s single desk model. The major advantage that the quota system in Canada has is that it is extracting a major premium from the market which you witness everytime you compare dairy product prices in the Canada to the US. Has there been Western Canadian farmers that have sold their Canadian farms and moved south of the border to try and tackle the open market. If the single desk stayed and you felt very strongly about the ability to market your grain, would you ever consider buying a farm in North Dakota or Montana? Well Ian Cummings did.

This video has been viewed over 2000 times since March and I continue to get emails from people all over the world in regards to Ian’s very controversial thoughts in the interview. Please let me know what you think about what Ian Cummings says…..

Canada to Sign TPP in New Zealand Next Week

DeLaval’s Herd Navigator and the Rise of Dairy Robotics

New Holland Kombi bales and wraps in one pass