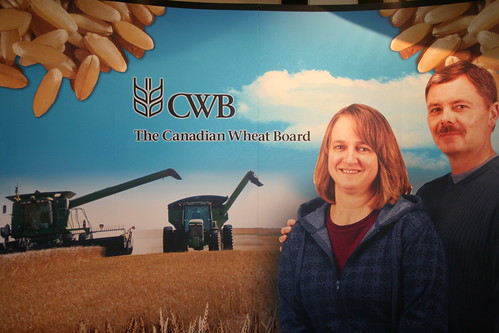 “Get You Popcorn Ready” — Terrell Owens, when with the Dallas Cowboys

With the result of the plebiciste being released on Friday, the next week is going to be very interesting. Based on the results the CWB will have to engage the next step in their campaign to save the single desk in Western Canada. Whatever happens, the drama will continue and no one is going to go away quietly.

I spoke to John De Pape, The CWBMonitor about the potential outcomes of Friday’s results and what could happen next. The smart money is betting that the results will be in favor of the single desk. John Depape believes that this is because teh plebicite has been skewed due to voter lists and pro-market choice farmers puposely destroying their ballots.

If the results are to keep the single desk, the CWB is very likely to engage a full campaign to try to pressure the government into saving the single desk. In my discussion with John Depape he confirmed that the CWB would be able to use the POOL accounts to fund this campaign.

Please read more from John Depape at his blog, THE CWB MONITOR

If the results are in support of extinguishing the single desk and changing to an open market the game just got a whole lot more interesting. As John Depape describes in our interview, Alan Oberg will have the very interesting decision on whether or not to accept the results or continue to forge ahead with the “save the single desk” campaign.

As John and I discuss, one of the next controvery is how much of the farmer owned POOL accounts will the CWB use to try and save the CWB based on their publisized fidiciuary duty. With the impending plebiscite results leaning in the CWB’s favor the board is going to try and use this levarage in the mainstream to try and get non-farmer citizens on it’s side. Having said that, I agree with John De Pape when he says in the interview that the probability is very low that anything changes the governments mind at this point. At least we speculate.

Enjoy the show and don’t forget to use light butter on your popcorn.

Rising interest rates mean the federal government's move to expand the interest-free portion of its advance payment program will save farmers — and cost government — more than originally expected. Last June, the government increased the interest-free amount that farmers can borrow through the cash advance program for 2022 and 2023 from $100 thousand to…