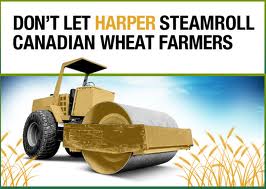 The CWBs latest attempt to rally support and gain a hearing is an ad campaign designed under the name “stop the steamroller“. The print, radio and video campaign focuses on a steamroller with the caption ” This is how the Harper government harvests Canadian wheat”.

The ads, paid for by CWB pool funds, were run in a response to the Harper governments “fast tracking” of legislation to dismantle the CWB. The Wheat Board says that that “fast tracking” is illegal and ignores a clause in the original act that calls for the government to consult farmers prior to any amendments to the act. Farmers opposed to the ads say that the use of pool funds to pay for the adds violates their rights and that the campaign is a waste of their money trying to fight the inevitable.
We decided to ask farmers what they thought of the CWB steamroller campaign and find out if it’s had any effect on farmers. We talked to farmers at the AGRI-TRADE Exhibition in Red Deer, Alberta.