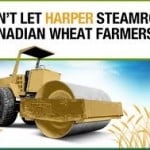 I had a conversation with a friend of mine that runs an advertising agency in agriculture.  He said that the campaign is clearly not designed to target farmers but instead urban people.  Last weekend the CWB was handing out pamphlets in Toronto subway stations.  How many farmers are grabbing a subway at Union Station to head back to the farm after a hard day at work?  The commercial has been on TSN and other major networks which have much more of an urban audience than rural.

If you have not seen the CWB steamroller commercial I have embedded it below.

If you cannot see the embedded video click here

The problem is that if the campaign was created to impact the urban population then the visuals in the ad have failed.  My friend  mentioned that most people in Toronto will have no idea that the steamroller is not a combine and therefore they will not be impacted by the suggestion that Prime Minister Harper is steamrolling our crops and farmers.  If you grew up in downtown Toronto, Montreal or Vancouver you really have no idea what a combine even looks like.  The campaign was designed to impact farmers but it appears that the target market was really going to be the urban population and that makes it an epic fail.

The reason for Brad Wall’s close relationship with farmers

With Trump making overtures to the EU, is Canada being left behind?

Today, the Government of Canada published the Clean Fuel Regulations (CFR), which is to replace the previously existing Renewable Fuels Regulations. The new regulations focus on reducing greenhouse gas emissions (GHG). The CFR set increasingly stringent requirements on producers and importers to reduce the carbon intensity of gasoline and diesel, according to a recent news…