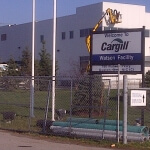 With this year being financially strong for the rancher and the feeder having opportunities presented to hedge and lock in fixed profits, one has to wonder how the cattle packer is making out.  With the feeder and the rancher making money it is quite difficult for all three segments of the cattle industry to make money.  According to some data, Canadian cattle packers are losing $50 per head right now.  Live cattle prices have been at record highs which has pushed the margin for the packer into the red.

Kevin Grier from the George Morris Center said to me:

“They had a tough year and finished mixed. Should stay tough given tight supplies. Biggest issue this coming year (2012) is how they get their supplies lined up so they gain better control over live costs.”

Regarding wholesale prices going forward, Anne Dunford said to me…..

With smaller supplies and the retail channel flexing it’s muscle, the cattle packer will have to really struggle to gather positive margins in the short term.  It would appear that the rancher and feeder at least in the short term are in a good position.  At least for now…..