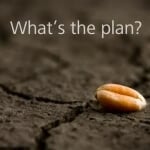 The world’s farmers will have to produce as much food in the next 40 years as has been consumed since the beginning of humanity. And they will have to do it with limited land, water and other resources.  Farmers are up to the challenge but they obviously need access to the best seed genetics to make it happen.  The Canadian Seed industry feels very strongly that they have a plan.

If you cannot see the the below embedded video, click here

The seed industry believes that it plays a vital role in finding solutions for this massive challenge facing the world’s growing population.  Farmers are naturally going to produce as much grain as they can but it is up to the seed industry to innovate and provide farmers with the genetics that are capable of pushing yields higher.  Without better genetics, production practices, fertilizer  rates and tillage methods farmers can only do so much.

WHY DO YOU GROW WHEAT?

Check out the above video and let me know what you think of the seed industries role in feeding  hungry planet as the population pushed to 9 billion by 2050.