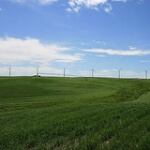 Green energy has been a huge push in Ontario agriculture through the development of solar and wind power infrastructure.  The solar power subsidization by the McGuinty government has been at the very least controversial at times and now the wind turbine projects has created some stir within the Ontario Federation of Agriculture.  The OFA has asked the Ontario provincial government to suspend the development of anymore wind turbine development until their members concerns are addressed.

According to the OFA press release this morning:

The OFA’s new position statement on industrial wind turbine development addresses a number of concerns of rural Ontarians, including:

One of the negative results of the wind turbine projects has been the negative relationships it has fostered between neighbors.  As one farmer described it to me, “one farmer gets the turbine contract and all the neighbours get sick and green with envy.”

This morning OFA President Mark Wales made a statement that reads:

OFA believes that the amendments to the Planning Act made under the authority of the Green Energy Act are not having the desired effect of providing for good planning. Removal of municipal input into industrial wind turbine projects has alienated the rural population and ignored competing community needs and policies.

All of these issues have been emphasized clearly by our members. Over the past few weeks we have clearly heard OFA members tell us of health concerns, concerns over the loss of farmland, encumbrances on their farm properties and many more issues related to the imposition of wind turbines across our rural landscape.

Most disconcerting of all is the impact wind turbines are having on the relationships across rural communities. When wind developments come to a community neighbours are pitted against neighbours. The issue of industrial wind turbine development is preoccupying the rural agenda.

OFA is telling the Ontario government our members have had enough. Rural Ontario cannot continue to be torn apart by wind turbines. The province needs to immediately suspend any further developments until our farm families and rural residents can be assured their interests are protected.

Wind turbine energy is looked upon by some as an eyesore and there have been claims of health hazards.  It is ironic to me  that green energy is causing such controversy in a province that prides itself on being the leader in the area.  What has happened is major fights within family’s for the contract rights, whether the turbines will even be built, lack or pricing regulation and who even get the contracts.  It will be interesting to see if the government will listen to Ontario’s largest farmer organization or continue on it’s current path.

R-Calf Sits Down With the Obama-Biden Transition Team