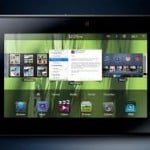 Through the January farm show season I continued to run into people that said to me that they were getting a Blackberry Playbook or had just bought one. Whether its the $200 price point or the the increased interest in tablets, it seems to me that the Blackberry Playbook finally has some appeal.  It would appear that maybe the Playbook project is being pulled from the scrap heap by some consumers.  We all know that there is business demand but will it ever tap the consumer market?

For farmers, the playbook has some definite benefits if you are already a Blackberry user.  Whether you like the idea of tethering or not, the ability to create your own hotspot does have some advantages in the middle of a field in the middle of Ohio or Saskatchewan.

In episode 11 of AgNerds, Peter Gredig and I discuss some of the reasons that the Blackberry Playbook may have a second life. Peter believes that if given a real chance the Playbook has advantages and features that are better than the ipad while I think its the high level of corporate security and the $200 price point that is creating new interest. One thing Peter and I do agree on is that the tethering is overrated by many buyers.

If you cannot see the embedded video below, please click here.

Connectivity the name of the game as ag equipment evolves