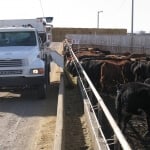 With over 200 days of travel as the President of NCBA, Bill Donald has been busy.  Donald has reign at the top of NCBA at a time that has been very good for Canada / United States trade relations.   With Canada shipping fat cattle south and Canada purchasing one billion dollars of US beef in 2011, the relationship appears to be very strong.

As a Montana rancher, Bill Donald understands how critically important the relationship of Canada and the US is for producers in both countries.  When Bill Donald was became President of the NCBA a year ago there was some concern over his history with R-Calf but that seems to be all water under the bridge at this point.

I asked Bill Donald about his term of President of NCBA and why he thinks the relationship between Canada and the US is so important to the cattle industry.

Where will all the byproducts go? The potential wasteful consequences of the lambda-cy label change