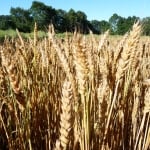 by Kent Erickson and Lynn Jacobson

In the past 150 years, wheat has played a significant role in the settlement of the Canadian prairies and the development of Western Canadian agriculture. Canada became the “bread basket of the world” because of the quality and quantity of wheat it supplied to countries around the globe.

In more recent years, Western Canadian wheat producers have struggled to compete with other crops and wheat-producing countries. Although wheat remains one of Canada’s most important cereal crops, new varieties and traits are needed to make it a sustainable and profitable crop option for prairie producers.

In Alberta, we’ve felt for some time that wheat producers need to have a stronger voice and more concerted industry focus. In 2008, the Alberta Winter Wheat Producers resolved to study the viability of an all-wheat commission in Alberta. For all wheat’s prominence in Alberta, only two small classes (winter wheat and soft white wheat, which account for just five per cent of the province’s entire wheat production) have been represented by a producer-run commission.

For the past year, we’ve been part of working to form the Alberta Wheat Commission. The commission would have one primary objective: to improve farm gate returns on wheat. It would also be committed to working collaboratively with all participants in wheat’s value chain.

Our steering committee has developed a strategic plan to realize these goals. The plan currently calls for the new commission to begin operating on Aug. 1, 2012, and to generate the majority of its revenue through a check-off fee (service charge) of $0.70/tonne on all classes of wheat produced in Alberta. Check-off dollars will be deducted from producer payments at the point of sale.

Of the estimated $3.5 million that would be raised through check-off dollars each year, a direct investment of $3 million would be made annually into research and market development and pursuing partnerships that leverage this investment into projects worth millions of dollars more.

In March, our steering committee will wrap up the many meetings and consultations we’ve been having with Alberta wheat producers about the commission’s plans. To date, the response has been very supportive, with more than 80 per cent of producers saying they favour forming the Commission.

This support is crucial for two reasons: to gain legislative approval from the Province of Alberta to form the commission; and to demonstrate that farmers are willing to invest in their industry.

With so many changes on the horizon for Western Canadian wheat, we see the Alberta Wheat Commission as one way for our province’s wheat producers to be better able to respond to the opportunities and demands of domestic and international markets and users.

It is also a way to ensure wheat continues to play an important role in Western Canadian agriculture.