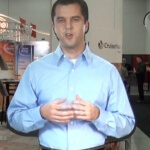 Every once in a while there’s something you see at a trade show that stops you in your tracks. In today’s world, that’s quite a feat considering the sheer volume of bells and whistles aimed at you to get your attention. This year, Syngenta had on display their “virtual agronomist” patterned after Robert Klewchuk, Syngenta’s Technical Manager for Western Canada. The Virtual Agronomist is a holographic representation of Rob that’s so life-like it constantly had a crowd around it. The technology is a head turner for sure and a unique and fun way for Syngenta to communicate with their customers. For the record, we’ve had Robert on the website before and he’s a lot more animated in real life than his hologram.  But it was nice to see him anyways.

I had a brief and one-sided conversation with the Virtual Agronomist and a longer more interactive conversation about the display at FarmTech 2012 in Edmonton, Alberta with Holly Nicoll from Syngenta.