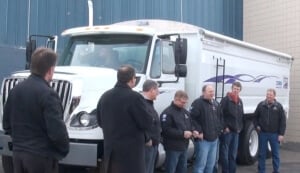 Giveaways are a pretty common thing at most farm shows. There’s always a chance that you can score yourself a hat, a jacket or even an iPad. Those things are great, but a 130,000 dollar tandem truck is on another level altogether. This year at AgExpo in Lethbridge Alberta, one extremely lucky farmer drove away with a 2012 International Tandem presented by Dow AgroSciences Canada and The Western Producer.

The giveaway was the culmination of a yearlong promotion by Dow AgroSciences Canada of their new Tandem broadleaf and grass herbicide. The contest encouraged farmers to send in their photos of their beat up trucks and to share their stories online. Six finalists were chosen: 2 from Manitoba, 3 from Saskatchewan and 1 from Alberta. The six were brought to the grounds at Ag Expo and each drew a key. We were there to cover the event as each one of the farmers tried their luck. Watch the below video to see who won the tandem truck.