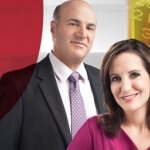 I always find it interesting to read or hear the mainstream media cover big ag stories.  We have been able to see this with the coverage of the CWB single desk dissolving early this year and now the Glencore – Viterra deal.

In the below episode of the Lang and O’Leary Exchange, three segments are featured on the Viterra – Glencore deal.  They really do provide a well rounded view of this deal by starting with Dragon Den’s star Kevin O’Leary banging the drum of pure capitalism, then Curt Vossen discusses why this deal works for Richardson International and finishes with NFU board member Doug Scott who claims farmers losing the CWB single desk has created this new market concentration.

Kevin O’Leary has some strong words for critics of this deal.

The show also interviews Richardson International, Curt Vossen (at 15:50) who discusses why he believes this deal is a great deal for the company and farmers at large.  A couple of key points made by Curt Vossen are that this deals creates a more competitive grain industry in Canada and that 55% of the Viterra – Canadian assets will still be held by Canadian based companies.  An additional point was that Vossen mentions Richardson and Glencore had started discussions of this potential purchase a couple months ago.
.
At 22:16 of the video, Doug Scott (Edmonton, AB farmer and NFU board member) joins the show to tell the hosts why he believes this deal is not good for farmers in Western Canada.  Scott argues that this deal was inevitable based on the single desk being dissolved by the Federal Government.  Scott argues that the “net benefit” test by the competition bureau is difficult to analyze.  Scott mentions that the Viterra – Glencore deal threatens food security in Canada.