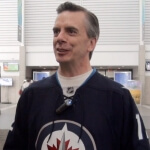 Farmers are starting to grasp the potential of social media. A growing interest has been shown by both the older and younger generation of farmer on how to use tools like twitter to their advantage and not just for their entertainment. Twitter in particular has gained ground in the agriculture industry for promotional use, social networking and a “pooled knowledge” use. One of the great things about Twitter is that “pooled knowledge” aspect. Essentially, you can pose a question, and have access to the entire user base’s collective knowledge to answer it. The other great thing about Twitter is it’s immediacy and its brevity. During a producers busy season, both of those qualities are highly valued.

Rick Taillieu knows the value of Twitter. Rick is with the Alberta Canola Producers Commission and recently hosted a webinar covering all the basics involved in signing up and using Twitter.

I talked to Rick about the value of Twitter at the 2012 Farmtech conference in Edmonton, Alberta.

If it's done right, deep ripping can help address a compaction problem in the field, but if you're not careful, it can also make it worse. As with any kind of tillage, you have the potential of breaking up soil aggregates with a deep ripper or subsoiler, but that's not all, notes Aaron Daigh, soil…