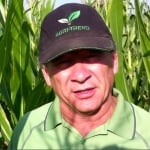 The corn crop in Argentina holds major influence over corn prices worldwide. Argentina is the fourth largest corn growing country worldwide. According to the USDA foreign agriculture service the projected crop for 2012-13 is projected to be 23.6 million metric tonnes. The 2011-12 crop was badly affected by drought conditions spread across a large corn producing area in Argentina. The drought resulted in significantly lower yields for most of that area and portions of that crop being chopped for animal feed.

In this episode of AgriTreks we get a first hand look at some of the lesser affected areas as we follow Rob through Cruz Alta, Argentina. Rob takes us through a stand of December seeded corn and talks with one of the local producers about the state of his crop.

Corn School: How much rain does corn need?

Weather is the ultimate source for small talk, and rainfall is perhaps the most talked about — from how much, to when, to not enough, and on too much. For this episode of the Corn School, Bernard Tobin asks Dale Cowan, senior agronomist at AGRIS C0-operative, about how much rain a corn crop needs throughout…