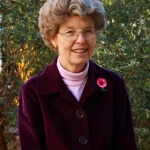 We don’t have top many agriculture celebrities.  There are people you recognize because you see them on tv, at meetings or on YouTube but in actual fact there is not a TMZ like service following around farmers or industry people (thank goodness for that).

Recently I travelled down to North Carolina to visit the Syngenta Biotechnology Center and I had a true agricultural celebrity sighting.  Now I will I admit that I had no idea prior knowledge of who Mary Dell Chilton was but I definitely did after I left.

Mary Dell Chilton is responsible for the success of the Bt gene being inserted into the corn plant and much more.

According to her Wikipedia page:

Mary-Dell Chilton (born February 2, 1939, in Indianapolis, Indiana) is a key founder of modern plant biotechnology. She was the first (1977) to demonstrate the presence of a fragment of Agrobacterium Ti plasmid DNA in the nuclear DNA of crown gall tissue. Her research on Agrobacterium also showed that the genes responsible for causing disease could be removed from the bacterium without adversely affecting its ability to insert its own DNA into plant cells and modify the plants genome. Chilton described what she had done as disarming the bacterial plasmid responsible for the DNA transfer. She and her collaborators produced the first genetically modified plants using Agrobacterium carrying the disarmed Ti plasmid (1983). She has been called the “queen of Agrobacterium.”

The great thing about people like Mary Dell Chilton is by all accounts, even though her contribution to the industry is in millions of dollars in value, she walks the halls with the same attitude as 30 years ago.  That is something she could even teach the mainstream celebrities.  Thank you for your contribution to plant breeding and the agriculture industry Mary Dell Chilton.

If You Give a Seed An Aspirin…

In case you were wondering, this is episode 381 of Wheat Pete's Word. That's a whole lot of agronomy, with host Peter "Wheat Pete" Johnson, and we've got plenty more! It's almost Thanksgiving, and there are so many things to be thankful for. Keep those things at the forefront of your mind as we head…