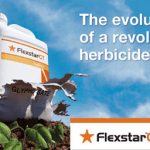 Spring wheat and barley growers, especially those in the black soil zones, may appreciate a new Axial brand from Syngenta. Axial Xtreme combines the broad-spectrum annual grass control of Axial Herbicide with the broadleaf herbicide fluroxypyr. Axial should deliver a high level of control of common annual grasses such as wild oats, green and yellow foxtail, barnyardgrass, Proso millet and others. Fluroxypyr has a particularly good reputation for the control of both cleavers and kochia. While there is no mention on the label that it will control Group 2 resistant Kochia, it would be reasonable to expect it will knock down that pest as well. Axial Xtreme can be tank mixed with popular broadleaf herbicides such as Refine SG, MCPA Ester, Buctril M, Curtail M, Mextrol, Frontline XL and Infinity to expand control to a wide range of broadleaf weed species. What I especially like about this new form of Axial is that it does not require a separate surfactant. That’s one less thing to add to the spray tank. There are plenty of options these days when it comes to annual grass and broadleaf weed control in cereals, but this one may be worth asking your dealer about.

Syngenta has also released a post-emergent herbicide for glyphosate-tolerant soybeans. Flexstar GT has a whopping 88 weeds on the label. Hopefully most growers will never see the more exotic ones in their fields, but this is likely the broadest post-emergent soybean herbicide label that I have ever seen. Flexstar GT contains a healthy dose of glyphosate to burn off just about anything green above the soil surface, plus formesafen (Reflex) which contributes residual control of redroot pigweed and ragweed. It’s likely that Flexstar GT will deliver residual control of other broadleaf weeds, but these aren’t yet on the label. Flexstar isn’t exactly rocket science, but that added residual control may put a smile on many soybean growers’ faces at harvest.

N emissions policy is a mess, let’s not make it messier

Soybean School: It’s been wet, so why are grasshoppers still a problem?

When Should I Apply Anhydrous Ammonia?

The Savvy Farmer Inc., a Canadian company, was created specifically to help farmers reduce their pest control costs. The company founders are pesticide industry professionals with a deep knowledge of pesticides and with a background in farming. We understand the dynamics of the industry at all levels and know how to help farmers save money.