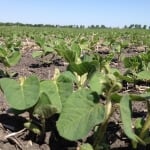 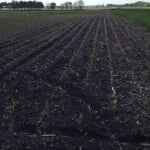 Kris Penner of H & M Farms near Altona, Man., sent in a few images of the corn and soybean crop. There was a light frost last Tuesday night (May 27th) that knocked the corn back a bit, especially on field margins, about six to eight rows in. It should recover fine, he says, but the frosted leaves were droopy and squishy like a rotten tomato. The corn was at the three to four leaf stage (image is from June 2). Canola seemed to fare better, with only a few spots showing signs of frost damage. Areas closer to Lowe Farm were harder hit. Soybeans are anywhere from just emerging to the first trifoliate stage or a bit better and generally in good shape (images from June 6). There have been some crusting issues. Some farmers further north have had to re-seed soybeans because of crusting issues. 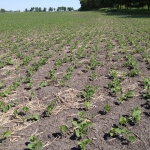 Kris says they got a great start to the seeding season with oats on April 17th, and started corn planting April 22. Mother Nature decided to throw a few curveballs, however, and it still took Kris and his team until May 27 to wrap up all seeding. This first week of June he and his crew were catching up on spraying.

If you want more agronomic information check out the Wheat School, Canola School or Pulse School.

The Agronomists, Ep 95: Top disease, weed, and insect challenges of 2022

Since 2019, the United Nations General Assembly (UN) decided to dedicate a day to celebrate all things pulses: World Pulses Day! The goal of the day — which falls annually on February 10 — is to increase awareness of the global food and its role in sustainable food production. The theme for World Pulses Day…