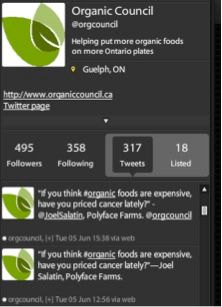 Twitter really is an amazing tool. The ability to share information and have conversations with people around the world is one of my favourite parts. But, like everything, there is always a down side. It is a downside across all social media networks that people can say things that aren’t true and can easily mix up fact from fiction. Case in point was a tweet from the Organic Council of Ontario, actually the same tweet twice in one afternoon.

Whether it was a good idea or not, I posted a reply to that tweet as my mind steamed with anger. “Thanks @orgcouncil. I was having a good day until your last tweet (extremely offensive) now I’m angry. This is exactly what is wrong with ag.” I’ve now waited a few days to cool off, and I’d like to break down both the tweet from the Organic Council, and my response.

First of all, know that I am all for organic. We do not produce organic foods on our farm, but I think those that do are tremendously dedicated to serving their consumers, as am I. Organic food serves an important market, but not the only market.

The quote that was tweeted comes from the movie Food, Inc., a movie that touches on some real issues with the food system, at the same time as building up some misconceptions about agriculture. While a great sound bite for anyone trying to sell movie passes, it is far from responsible. I read it as saying that anything not organic will give you cancer. Those with family members & friends that have been touched with cancer and those that produce non-organic food should all be tremendously offended.

I think when an agriculture organization, filled with fellow farmers as members and directors, shares a message like this it hurts us all. It gives the impression that one group of farmers is better than another, instead of the truth that all farmers wish to produce high quality, safe and nutritious food for their consumers. The consumer that buys my milk is putting their trust in the science behind nutrition, crop development, and animal care that we see as a priority. That consumer’s chance of contracting a disease like cancer is no greater than if they chose milk from an organic farm. The same goes for their purchasing decisions on meats, produce, and processed foods.

Why I believe it hurts all of agriculture, is it takes our mind away from what our target should be. That target is providing stories from each of our farms, not sound bites that promote fear and fiction at the same time. There are far too many half-truths and outright lies floating around social media and the rest of the Internet to think that our biggest battle is amongst ourselves. Instead let’s all work together to promote the great work we do as food producers.

And finally, all of us using social media need to remember that everyone always has something to say, but it doesn’t mean it needs to be quoted.

What Impacted Me At the AgChat Foundation Agvocacy 2.0 Conference