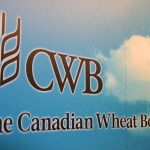 The Canadian Wheat Board has announced that they have signed a grain handling agreement with Viterra staring August 1, 2012.  The agreement will be a compliment to the Cargill agreement that was reached previously.   The CWB – Viterra agreement will also provide the CWB with access at the port.

Since the CWB does not own any grain handling assets, it has been striving to gain access to elevators and ports to allow it to accomplish its survival plan in the new grain marketing environment.

From the press release:

“We are pleased to forge a new alliance with Viterra that will assist the CWB in marketing farmers grain through our pool programs.”

“This agreement provides growers with access to the CWB pool programs for wheat, durum and barley and Viterra’s comprehensive logistics network across Western Canada.”

Realistically these are the kind of agreements that Ian White and the CWB have to sign in order to execute on the new pooling programs that they will offer.  The new world is starting to take shape.

The association that represents farm equipment dealers across Canada is speaking out against a "right-to-repair" private member's bill that would amend the Copyright Act to allow Canadians to circumvent computer software to diagnose, maintain, or repair a product, whether that's a phone, a household appliance, a car, or a tractor. Bill C-244 — introduced by…