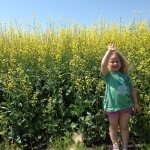 I had the chance to spend a very hot and sunny afternoon with Don and Jeannine Guyot, who farm at Fannystelle, Manitoba. It’s been a rough few years in the area. Last year, Don says he only used maybe a quarter of his total storage. It would seem that 2012 is poised to make up for some crummy weather last year.

Not that this year has gone off without a hitch. After a very good start to the seeding season, an early May wind storm sheared off most of the just-emerging canola Don had planted. He reseeded all but a quarter of it and is glad he did. Yes, it’s a tad later than some of the fields in the area, but it is still a good looking canola crop.

What Don is really excited about are the soybeans. A few years ago, 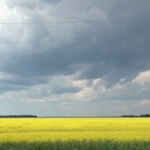 frustrated with growing flax that never seemed to yield more than 25 bushels per acre, Don’s seed rep suggested he try soybeans. He hasn’t looked back since. Partial to DEKALB 25-10, he’s seeded almost a third of his acres to soybeans this year. The crop is just beginning to flower and looks green, healthy and ready to close up the canopy. 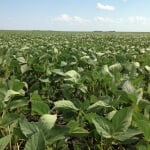 Don also seeded oats, as did many farmers in the area, and there isn’t a bad field among them. The spring wheat looks good and is likely a week to two weeks ahead of average, he says. He’s started a small field of AC Carberry and is pleased with how it’s coming along. He typically has sown Glenn wheat (shown in the photo), but is looking to update his genetics.

Always curious about changing management practices, Don is running a soybean inoculant trial (double inoculated vs. single) on 40 acres and a soybean variety trial, though he’s the first to admit the trials are not scientific by any means. Still, he says, it’s an easy way to try new things without risking a wreck on a field scale.

Blackleg — Underestimated, Misdiagnosed and a Serious Threat to Canola