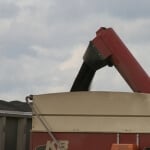 If there is a pattern developing in the 2012 harvest across Western Canada it would have to be the disappointing canola yields. Farmers have taken to Twitter to display there disappointment in the yields.  One of the common threads has been, “I have 50 bushel swaths and 25 bushel yields.”

With over twenty million acres of canola planted in Western Canada, there were high expectations of yellow profit across the west.  Many farmers will achieve average yields but some are being dealt a worse hand than average.

Troy Prosofsky, Agronomy Specialist Canola Council of Canada (Southern Alberta) made the following comments to me over the phone this afternoon:

Western Canada has had one of those years when everything seemed to hit us. We had insects (leaf hoppers producing aster yellows) and mother nature who turned off the tap and cranked the heat to us. All across the prairies we are seeing blanks on main stems which is caused by heat stress and insect feeding. Additionally, schlerotinia really caught many growers by surprise who decided to not apply a fungicide.  Even growers that applied a fungicide had levels of infection that hurt yield.

Some farmers have gotten away lucky with 45-50 bushels but those farmers seem to be few and far between.  Here are some comments when I asked about canola yields on twitter.

@shaunhaney Talked to a farmer today who said he had a stand for 50bu, went 13bu/ac. Cause->Widespread sclerotinia, bugs and heat in July.

@shaunhaney had one canola field that had inputs for 80 bus, barely hit 30. 7 weeks without rain did the damage. #drought12

What has been your experience this year? Share your frustration or jubilation with us and other readers in the comment box below.  Did you get the yield you expected?  Were you pleasantly surprised or do you feel disappointed?

We thank you for sharing your thoughts.

Alberta Canola Producers Commission Looking Out For More Producers Than Ever