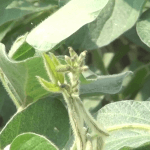 RealAgriculture.com caught up with Morris Halvorson of Foam Lake, Sask., at Agribition last week to talk about his 2012 soybean growing experience (to get an idea of how far north Foam Lake is, click here). He believes he’s the first farmer in Western Canada (with more than only a field or two) to grow nothing but soybeans. Why’d he do it? Well, it’s been a wet few years in his area. Cash flow for fertilizer was tight, the numbers penciled out and he’s a seedsman that sells soybean varieties outside the typical growing area — he needs to showcase what’s possible in his area. So he did.

Soybeans are getting a lot of attention on the Prairies, and 2012 turned out to be a great year for the crop in Manitoba and beyond, but is growing wall to wall soybeans a good idea? What’s the recommendation for fertilizer? What about frost and late-season rain risks? We put these questions to Dennis Lange, farm production advisor with Manitoba Agriculture, Food and Rural Initiatives.

Soybeans fix their own nitrogen, yes, so they are a great fit on low N fields and can help stretch your fertilizer dollar. But that doesn’t mean they don’t need any fertilizer. Phosphorus and potassium levels should be built up to adequate levels in the year before soybeans (as measured by a soil test), as applying more than 10 lb/ac of P in the seed row is not recommended. Lange recommends a double inoculant — liquid on the seed and granular in the furrow — to ensure thorough nodulation, which leads to excellent N fixation.

Those tempted to grow soybean back to back because of very low disease levels must also keep in mind that soybeans, just like canola was, is only novel for so long. Eventually the pests will show up — the tighter the rotations, the sooner that’s apt to happen. Lange recommends soybeans as a one in three year rotation. Many farmers like to follow soybeans with oats or another cereal because of the excellent grassy weed control options for the soybean crops. He also cautions farmers to choose herbicide tolerant traits of any canola variety grown in the second or third year following soy, “If you grow Roundup Ready soybeans, for example, growing Roundup Ready canola two years later can cause a problem with volunteers.”

Perhaps one of the biggest risks of going all-in on soybeans is the long-season needs of the crop. Lange advises farmers to choose varieties well-suited to their growing area’s season length and not to chase the highest yielding varieties — a shorter season crop with lower overall potential is going to work out better, on average, than a high yield potential that doesn’t finish or gets hit with late season frost. “Farmers growing soybeans for the first time have to get used to starting harvest in September,” Lange says.

In this video, Morris outlines some key benefits to growing soybeans, and lists some of the challenges, risks and disadvantages, too. As mentioned previously, this isn’t an endorsement of his agronomic decisions, only an example of how one farmer is making the crop work on his farm.

Syngenta Canada says it will not have its lambda-cyhalothrin-containing insectide, Matador, available to western Canadian farmers for 2023, but is working to have it back on shelves for 2024. Matador is approved for use on a variety of crops, including potatoes and canola, however a label revision from 2021 comes into force in 2023, removing…