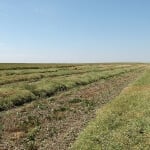 13.4 million tonnes of canola is, historically, a big canola crop. For 2012, however, it’s a total tonnage figure that disappointed many Western Canadian farmers. As we reported earlier this year, the swaths looked like a 35 bushel crop but yielded closer to 20. Many were shocked by the significantly lower Statistics Canada production number when it was announced in early October.

Canola and its meteoric rise in acreage is a good news story. Extensive investment into a domestic crush market and an announced food-grade oil refinery has built a hearty crop demand appetite within Western Canada, perhaps to as high as 10 million tonnes within the next few years. The hiccup now is what happens when supply dips, either because of stagnant acres or, like this past year, poor production?

RealAgriculture.com’s Lyndsey Smith asked Mike Jubinville, president of ProFarmer Canada, if we’ve reached a point where there just isn’t enough canola to go around, and what impact this will have on canola prices.

Canola School: Getting a Handle on Where Clubroot Exists