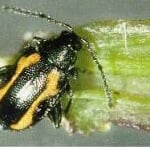 In this video taken at this month’s Manitoba Agronomists Conference at Winnipeg, Man., John Gavloski, provincial entomolgist with MAFRI, explains more about the difference between striped and crucifer flea beetle, why the insect is not actually displaying resistance and when to scout for the pest.

Canola School: Who is Pushing for Change in Global Markets?

Canola School: Can your fans keep up with large bin size?

Producers need to adapt quickly in crucial crop year With a nationwide crop input shortage impacting producers, ADAMA Canada announced today that it has secured additional MCPA to fulfill its market obligations for the 2022 crop year. Even with the additional supply, the company expects it will only be able to close a portion of…