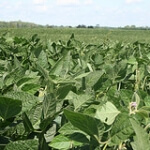 The final Statistics Canada numbers are tallied for the 2012 crop and while there are few surprises in the report over the last version, it should be noted that corn and soybeans both had banner years. Grain corn is estimated at a record 13.1 million tonnes, up 15.0% from 2011.

For more on the final Stats Can numbers, click here.

John Deere's 5M utility tractor series lineup is getting new attention at the ground level with the 2023 models. With the new model, the series now boasts a range of 75 horsepower to 130 horsepower, with the ability to either have cast wheels or steel wheels. If you do choose the cast wheels, says Greg…