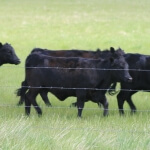 The threat of bovine tuberculosis from wild populations of animals in Manitoba’s Riding Mountain National Park area has weighed heavily on cattle producers in the region for some time. The region has seen a steady decline in cattle and ranchers in part due to this threat.

As a plan of attack, Manitoba recently announced the appointment of Dr. Allan Preston, the province’s former chief vet, to a leadership position to co-ordinate the eradication effort for the area.

Harry Siemens of SiemensSays.com recently interviewed Dr. Preston on the scale and scope of the tuberculosis problem in the Riding Mountain area, as well as his plans for eradicating the disease.

Barry Gets a New Stetson Cowboy Hat at the NCBA12

NCBA10 – The Cattlefax Outlook for the 2010 Cattle Market – Duane Lenz