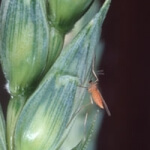 The 2013 wheat midge forecast map is now live on the Alberta Agriculture website, Ropin the Web. This forecast is based on 298 soil samples taken in the fall after harvest. Indications are that wheat midge will be more of a concern for 2013 than it was for 2012. Midge numbers have increased and they have also shown up in what could be considered non-traditional parts of the province.

In 2011, wheat midge was first identified in the Peace Region. The first reports came out of wheat heads and were discovered by a sharp-eyed agronomist while scouting for swathing/harvesting decisions. Subsequent soil surveys in the region have found midge but not in levels that spark major concerns for the region. The bad news is we have yet to find any sign of parasitism. This could mean a potential for major increases of wheat midge in years to come in the region as has been the case in the Flathead valley in Montana. To explain how we measure parasitism it is necessary to understand how the survey is completed.

Soil samples are taken from fields in the fall using a standard ¾ inch soil probe. 17 individual core samples make up the sample from one field (about ¾ of a litre of soil. The soil is washed through a series of screens. From the last screen the organic matter is floated off and then checked under a microscope for the larval cocoons (the overwintering stage). Each larva that is found is dissected and checked for the presence of a small “worm”. A larva inside the wheat midge larva is a parasitoid. These parasitoids kill their host before they emerge the next spring and can greatly reduce the population of wheat midge. The level of parasitism is reflected in the forecast.

The other area that is surprising to find midge in is southeastern Alberta, an area better know for troubles with wheat stem sawfly. There have been midge in this area before but they have not previously shown up in the survey in significant numbers. There were elevated wheat midge larvae numbers found in samples from northern Cypress county, MD of Acadia and Special Areas 4. Parasitism was discovered in all of these areas. The interesting problem this creates, however, is that if spraying for midge takes place it may kill the parasitoid of wheat stem sawfly and result in increasing problems with wheat stem sawfly.

Midge problems are the highest in the western portion of southern Alberta. Lethbridge, Vulcan, Willow Creek, Foothills, Rockyview and Wheatland counties all have fields that show elevated numbers of wheat midge. There are individual fields throughout the central Alberta and a hot spot in Red Deer County.

Producers should consider purchasing some midge tolerant wheat to assess the performance of the varieties on their farms. The other major management tool (other than spraying) is to move the seeding date of wheat earlier in order to have the wheat past the susceptible stage prior to midge emergence.

The map (complete with interpretations) can be found here.

Have a Merry Corn School Christmas

Scott Meers is insect management specialist with Alberta Agriculture and Rural Development. Find him on Twitter as @ABbugCounter

The war on weeds is an ongoing battle for growers. With challenges and changes across the industry, including the advent of herbicide resistant weed, growers are looking for tools to add to their arsenal against weeds. Jon Jackson, president at Global Neighbor Inc, says the company's weed seed destroyer offers weed control at harvest on…