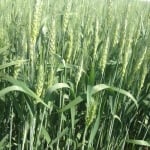 The standard 90 pounds of nitrogen on wheat in Ontario just doesn’t cut it anymore. That’s according to OMAFRA Wheat Specialist Peter Johnson. Johnson noted that some of the top growers in Ontario are using anywhere from 130 to 150 lb of nitrogen applied to ground that doesn’t have residual nitrogen from a cover crop. Those are rates that Johnson says should have left those wheat crops flat on the ground. So why are those crops responding so well? In this episode of the Wheat School Peter Johnson explains why those crops responded like they did and why the envelope needs to be pushed in nitrogen application rates in wheat in Ontario.