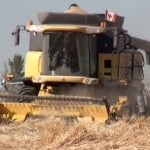 Steve Laroque is starting to see some significant differences on his farm north of Drumheller, Alta., after three consecutive years of practicing controlled traffic farming. After learning some hard lessons in the first few seasons — their measurements were off when setting up a hitch for inter-row seeding — 2012 offered a glimpse at some of the changes happening below ground.

For past RealAgriculture.com coverage of controlled traffic farming, click here.

In this video, Steve outlines how increased water infiltration allowed for earlier and more timely seeding, and how harvesting both peas and canola after hail was made easier due to tall stubble and row direction. While they have measured yield differences in plots off site, Laroque says that without a check plot it’s impossible to quantify yield differences. A check field or fields may be in the works for 2013.