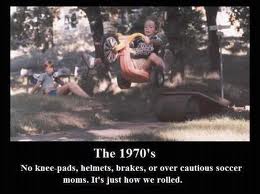 I saw an old picture the other day of a kid on a big-wheel in mid-air that just launched off a massive home-made jump with a caption that read: “The Seventies: No knee-pads, helmets, brakes or over cautious soccer moms. It’s just how we rolled.” Funny pic, but unfortunately the statistics were there to back it up. For most producers at that point in time, a farm safety plan was an after-thought and the number of agricultural workplace fatalities were far too high. Fortunately, since then a shift has taken place with a steady decrease over time in the number of on-farm fatalities.

A recent press release from the Canadian Agricultural Safety Association reads: “According to the most recent report from Canadian Agricultural Injury Reporting (CAIR), the rate of agricultural fatalities in Canada has declined by 38 per cent from 1990 through 2008. The most encouraging shift took place in the second half of the study. Throughout the 1990s, an average of 118 people died on farms each year. After 2000, that number dropped to an average of 89 deaths per year.” In order to keep that trend moving forward, education and training have to occur at the farm level, especially when it comes to proper use of commonly used machinery and vehicles like ATV’s.

Jeff Shaw of Manitoba Workplace Safety & Health was at Manitoba Ag Days to talk to producers specifically about ATV rider safety. Lyndsey Smith caught up with him there.