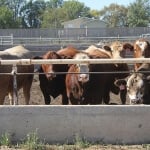 A draft of a revised Canadian Code of Practice for the Care and Handling of Beef Cattle is up for a 60-day comment period, and the cattle industry is encouraging its members to read the draft and proposed changes before the comment period ends in early March. The process of creating this draft took several years and has been compiled with the participation of an extensive list of producers, researchers, processors and industry. The proposed code of conduct covers every aspect of cattle production, from requirements of wintering sites, to tagging and branding, to feedlot health and welfare, plus much more.