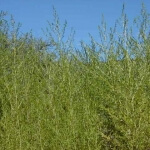 If ever we needed a new curse word, let me humbly suggest kochia. If you thought it was tough to kill before, it’s quickly becoming even more difficult. As Clark Brenzil, provincial weed specialist with Saskatchewan Ministry of Agriculture, explains, not only should kochia be taken off the label of every Group 2 herbicide, it’s also developing glyphosate resistance. What’s more, resistance to dicamba and fluroxypyr (Group 4) products was reported in Montana and North Dakota as long ago as 1995.

Testing is on-going by Dr. Hugh Beckie, AAFC Saskatoon, to confirm glyphostate resistant kochia in Saskatchewan and Manitoba, however it’s safe to assume this is something most Prairie farmers need to have on their radar.

Why is kochia developing such wide-spread resistance so quickly? Brenzil says there are a few reasons. For one, kochia relies exclusively on seed production to spread. Each plant produces over 40,000 seeds per year, and the plant is rather promiscuous, sharing its pollen liberally. Outcrossing is common, which makes for very genetically diverse populations. Add repeated glyphosate use to the equation and you’ve got a recipe for disaster.

If you’re sufficiently threatened by the advent of multi-mode-of-action-resistant kochia, you likely now want to know how to a) avoid it, or b) delay it as long as possible. Excellent idea, says Brenzil, but while the solution is relatively straight forward, it’s going to cost both time and money. “Except for in-crop control on herbicide tolerant canola and soybeans, glyphosate should never be used alone (if you’re targeting kochia),” Brenzil says. “If you’ve got kochia, assume it’s resistant to Group 2s and glyphosate.” What’s more, Brenzil adds if you’re targeting perennials,you may have better success treating the perennials the previous fall, if using Group 14 combinations in the spring. Group 14 herbicides cause rapid cell rupture in plant tissues they contact, limiting the uptake and movement of glyphosate within perennial weeds, so a spring burn-off tank mix isn’t necessarily going to be the most effective for perennials. But that adds time and money, Brenzil says, and that’s unfortunately where we are headed in combating herbicide resistance.

“If farmers do this now, we have the chance to get ahead of the problem and keep glyphosate as a tool for managing kochia for longer than 20 years,” he says. “There is margin now in crop prices; this is a good time to tackle the problem.”

The added risk, of course, is the traveling nature of the troublesome pest. Because the plant skeleton actually travels and spreads the seed, it’s not just the pollen and outcrossing you have to worry about. If you’re neighbour isn’t tackling the resistance problem, you’ll be fighting this battle until you’re very weary. My suggestion? Farmers — all of you! — and any companies managing vegetation (hi, railways and oil companies!) need to take heed to this growing resistance issue and take Brenzil’s advice. Multi-modes of action in spring burn-off isn’t really optional any more if you’ve got kochia. It’s time to tank mix, tank mix, tank mix.

The Norwegian Flag Yara Pants Make an Impression at CropWeek 13

Sustainability is a journey not a destination, and the global agriculture industry is working to balance meeting global needs while maintaining the health of the environment that supports the industry. That's according to Jack Bobo, who works at Nature United using his expertise to oversee global food and water policy, and spoke this week at…