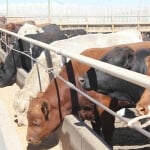 JBS USA, a subsidiary of Brazil-based JBS S.A., has announced it is moving forward with purchasing XL Foods’s Canadian operations. JBS took over management of the Brooks-based plant in late October after E. coli contamination shut down operations at the plant. JBS, upon exercising this option, anticipates the purchase of XL Foods to be completed by next week. A takeover of the U.S.-based operations of XL Foods is awaiting regulatory approval in the U.S.

This purchase includes the Brooks plant and feedlot (including 6,600 acres of land) and a packing plant in Calgary. The Alberta government waived certain rules of foreign land ownership as part of this sale. As part of that agreement, should JBS ever sell the Canadian plant and XL Foods operations, the land would also have to be sold.