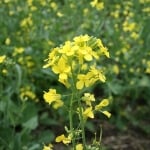 The last time a novel biotech trait event for Western Canada was rolled out, the Winnipeg Jets were headed to Phoenix, Arizona, much to the sadness of many a Winnipegger. But now, it’s 2013 and the Jets are set to play once again after a long delay (thanks, lockout!), and a brand new herbicide resistance trait for canola is being launched.

During this week’s Crop Week at Saskatoon, Sask., Monsanto Canada announced its new TruFlex Roundup Ready canola trait, a brand new type of glyphosate tolerance for the crop. RealAgriculture.com’s Lyndsey Smith was at the event and spoke with Jesse Hamonic, canola traits marketing lead with Monsanto. In this video, Hamonic explains what makes the TruFlex trait unique and when farmers can expect to see it in new varieties.

CN ‘ahead of schedule’ recovering from 8-day strike