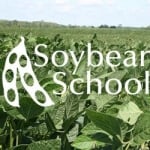 There’s generally always enough moisture metered out through the growing season to finish the soybean crop, but soybeans can soak up a lot of water and translate that into yield if it’s there. But by how much? What are we really losing to drought stress?

Dr. Hugh Earl of the University of Guelph and colleagues have compiled data from three growing seasons (2009, 2010 and 2011) that compared soybean grown under irrigation vs. those that depended on Mother Nature. Depending on the year, the study suggests a yield bump of 8% to as much as 24% under irrigation. The key, Dr. Earl says in this episode of the Soybean School below, is that even with ample total rainfall, there are times during the growing season where the crop is limited by moisture. By adding irrigation water to fill in those gaps, Earl was able to estimate how much actual yield was lost to water stress under rain-fed conditions.

After committing $115 million in tariff proceeds to Ukraine, the deputy prime minister says she's working with the agriculture minister to "resolve the situation" regarding the cost of 35 per cent tariffs applied to fertilizer sold to farms in Eastern Canada. Chrystia Freeland, who is also the finance minister, was asked about the fertilizer tariffs…