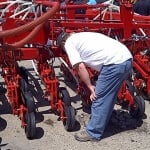 While Australia and Canada have much in common in regards to farming, the two countries’ growing seasons are also drastically different in many ways. One major similarity is farmers’ love of a good head-to-head equipment comparison, and what better to compare than seeder set-ups.

That’s exactly what ABC News’ Landline program covered in a recent news story. This 12-minute story covers a multi-seeder trial, where farmers brought whatever they were seeding with to one field to do a head-to-head comparison. Using the same variety, seeding and fertilizer rate, farmers set up their own machines to seed as they would on their own farm.

Some of the brand names will be familiar to Canadians, even if the wheat variety is not. The trial was assessed for plant stand numbers, disease and weed levels, root development and then for yield, protein and screenings. The 2012 growing season was far from ideal in Australia, but there was good variability between seeding passes — yield from the lowest pass was less than half of the highest.

For the full story and to watch the seeder comparison, click here.

Taking Our Place on the Global Agricultural Stage