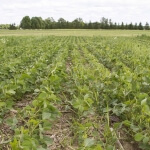 Optill is a pre-plant soybean herbicide that offers a fast burn-down and residual weed control of grassy and broadleaf weeds. Pre-registration trial results for Optill showed a yield increase of two to three bushels per acre compared to using glyphosate alone, according to the company’s press release.

Tank-mixed with glyphosate, Optill is a premix dry formulation of KIXOR and imazethapyr (Group 14 and Group 2) that uses multiple modes of action to control a broad spectrum of weeds in glyphosate-tolerant soybeans. When applied pre-plant, Optill is part of a two-pass program that provides a fast and complete burndown with early season residual control of later germinating weeds for four to six weeks, the company says.

21 conversations from the rollercoaster that was 2021

Where Does Urban Canada Get Its Information About Farming?