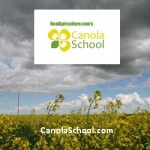 It’s one thing to know that you should be scouting for blackleg, sclerotinia, sulphur deficiency and cutworms, for example. It’s another thing entirely to actually scout every field for every pest at the optimal timing during the hectic growing season. What if there was a way to practice insect, disease and nutrient deficiency identification when you’ve got more time, like, say, in winter? Well, there is. The event is called CanoLAB, now in its second year at St. Albert, Alta., and this year has expanded to include a Brandon, Man., and Saskatoon, Sask., event.

In this first episode of the 2013 Canola School, Rick Taillieu, grower relations and extension coordinator with Alberta Canola Producers Commission, explains just what happens at CanoLAB, why it’s such a unique event and just how popular the insect Arena of Death can be.

Corn School – Genetics Prove Their Worth In Tough Times