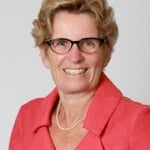 Kathleen Wynne was sworn in as Ontario’s premier yesterday, and, as expected, assumed the role of agriculture minister in addition to her role as premier. What surprised many, however, was that she didn’t take on OMAFRA — she just took on OMAF, as the Rural Affairs portion of the ministry was handed to Jeff Leal, MPP for Peterborough.

RealAgriculture.com’s viewers and readers have already weighed in on what they think of Wynne appointing herself as ag minister, but Twitter was a-buzz last night with those for and against her decision to split ag and rural affairs. Here’s a sample of the discussion:

Christina Crowley (@Country__Girl):  @SavvyFarmgirl @realag_lyndsey I think this is a huge win-win for ag b/c now we have 2 Ministers representing our interests.

Jen Christie (@SavvyFarmgirl)
@Country__Girl @realag_lyndsey #Ontag was fighting for attention for years.. Now that we have it, are we  ready with what we want?

In response to Rural Affairs being split from Agriculture and Food:

What do you think? Does it make sense to split the ministry? In a time of budget constraints, does Wynne have too many in her cabinet (it sits at 27. Five more than McGuinty’s cabinet)?

Update: MPs to send C-49 back to the Senate again, after next week’s break